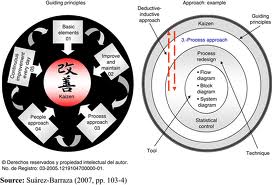 Kanban is a philosophy that is utilized in sustaining the compilation of company assets and requirements. Kanban operates by sending a message to manufacture and transport a new product as the resources are being utilized. The messages are sent through a self restoring sequence of events that are continuous in the same order thus enlightening both the manufacturers and purchases on the different aspects of Kanban. Kanban has over the years been used to improve kaizen job and kaizen supplies putting up a system that promotes continuous improvement.  However, a lot of people often assume that Kanban is a system used to sustain an inventory which is in fact not the case. Kanban can be described as more of a planning methodology that facilitates workplace prospects such as what to manufacture, when to manufacture it and finally amount to manufacture.

One Of the Most Successful Companies

To Implement Kanban, Toyota, did so by continuously sticking to its fundamentals irrespective of the slow and gradual continuous improvement in every sector of the company. In the long run, the Kanban system grew to be a very vital tool in sustaining the entire manufacturing business. It further showed that it was a very ideal way of enhancing continuous improvements for both kaizen jobs and kaizen supplies.

The Kanban fundamentals were initially coned from how supermarkets operate and handle their business. The ideology was that most supermarkets strictly purchase wholesale products that will clear from their shelf in the least time possible especially if they are perishable goods. Supermarkets don’t fancy putting products that has a long shelf life in terms of sales as this will greatly injure their profits. In generals, the Kanban fundamental can be described in simple terms as cyclic shelf stocking where only required goods come and go on a regular basis.

This technique is very ideal for both the seller and buyer in that the seller clears out their products effectively while the buyer gets exactly what they came for; convenience in the making.  The companies therefore emulated this technique by stocking only things that had sale value to customers. The customers on the other hand received mostly what they were looking for and were satisfied with the company’s stock provision policy. However, thorough research had to be done so as to identify the major items that consumers were greatly attached to. They also had to add any advancement and changes that would appeal to the consumer and thus attract them into buying.