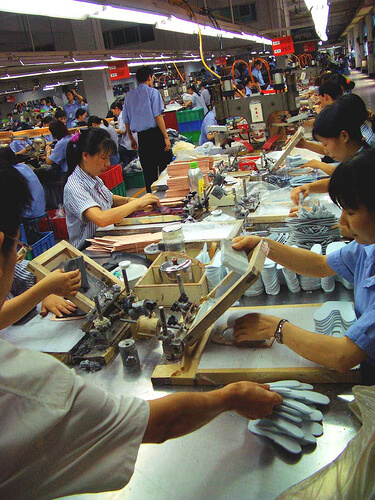 LinkedIn is a veritable wealth of knowledge for professionals looking for insights and discussion within their industry, and business owners won’t be disappointed by one discussion prompt this week. One user made an initial post stating that, contrary to popular belief, being the “cheapest” should never be the goal in your business. He goes on to argue that looking too hard at minimizing the costs of running your business might cause you to lose focus on other important aspects that will ultimately keep you in the game longer. This is, he says, due to the fact that the actual value you receive in return for wages paid, material costs, and more is what determines the ultimate success of your business. Let’s go through some of the merits of such a position and discuss the relationship between direct input costs and your final products, profitability, and corporate longevity. 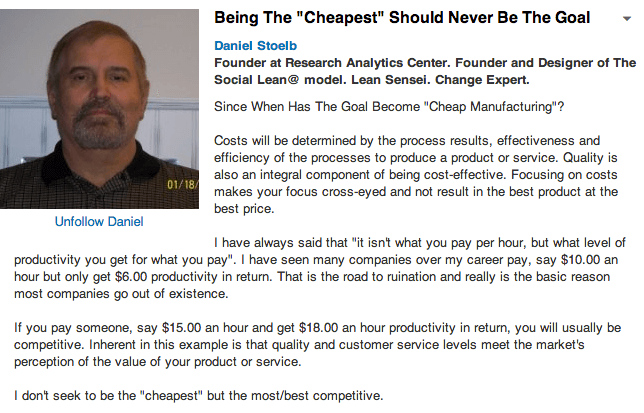 One of the biggest areas that the cost vs. value debate makes a statement is in the realm of worker wages. While we have to put work contracts in terms of dollars per hour, these amounts are not always directly relevant, or at least measurable in such a simple way, to an employer. Looking at employee productivity, work ethic, setbacks, production numbers/results and more, it is usually apparent that some workers have a higher inherent value than others.

Look at it this way: Let’s say you pay a worker in your warehouse $11 per hour to conduct their work. Their tasks include checking in stock, checking out orders, re-stocking in-store aisles, and a few other assorted tasks each day. Tending to these responsibilities at a competent level is a job you have deemed worth spending $11 per hour on. Now let’s look at two different workers: Worker A arrives early most mornings and sticks around to help close up shop in the evenings, she is efficient on the job throughout the day, looks to fill any down time with additional tasks or by helping coworkers, and often opts out of her breaks in order to fill more orders. Worker B, on the other hand, seems often distracted while working and sometimes this leads to mistakes and orders that have to be re-done, wasting time. He takes full advantage of his breaks, which is fine, but also seems to need additional time to smoke and check his phone throughout the day. From an objective standpoint, you would probably view worker A as doing slightly more than expected of her position, and worker B of doing slightly less. By extension, worker A is likely worth more than $11 per hour of value to your company, while worker B is worth less than $11 per hour.

To the original poster, this concept of actual value when looking at wages and outgoing costs for a business is the one and only primary difference between businesses that succeed and those that ultimately are forced to fold. If you are consistently hiring worker A types, you’ll be setting yourself up for success. Furthermore, if you can calculate the actual value you get from these workers (not impossible to do by accounting for day to day productivity/profits, hours they work, etc.) you may find you’re getting a huge return on investment. In our previous example, you might determine that some workers are giving you $16 per hour in value for your $11 wage. But what happens if you raise your wage for the position to $12.50?

You might be wondering why you’d do this when you’re basically getting $5 extra in value from a worker every hour already. However, if you wanted to replace your lower-value workers with more high value types, raising the wage might help attract these employees. While your individual clearance on each worker would be $3.50 per hour now, your overall value would skyrocket from having a whole workforce of high value people.

If asked which country a company could outsource to for the cheapest labor, you wouldn’t be alone in naming Asian, South American, or even African areas in which wages are extremely low. For many years, these low wage requirements also translated to high value margins for corporations. In recent years, however, the tables have turned, and many large, first world nations, including the UK and the US are becoming popular labor destinations. Wages are certainly higher in these countries, causing companies to shell out more per worker, but consistency in standards, quality, regulatory hoops, and exchange rates make per-worker value higher in these nations.

Here’s a breakdown of the recent shifts as related by a IndustryWeek article dated April 29th:

A study by the Boston Consulting Group shows that traditional views on low-cost manufacturing are not true anymore. The last 10 years has seen a shift in the lost-cost advantage away from China. China is still ranked the lowest cost by some measures, but the all-in cost, including quality, has resulted in a new look at other manufacturing centers, including the US. China’s cost advantage in manufacturing is now less than five percent. Mexico is now lower-cost than China, and the US is on par with Eastern European costs.

Moving forward, expect companies to thrive who focus on value. In the US, for example, the federal minimum wage, as well as that of many individual states, may be raised soon. Cheap Manufacturing Businesses looking for the cheapest labor to fill their ranks may find themselves squeezed when these changes come about. Henry Ford, the great American automotive entrepreneur, is often credited with paying above-average wages to his workers because he recognized that if his workers could afford his own products, and were paid well enough to want to make them the best on the market, he’d likely see a value return on these extra outgoing dollars anyways in the future. Having an eye for your company prospects five, ten, or twenty years from now is always a good idea, and it may just start with getting yourself out of the “cheap” mindset.

If you’re looking to save money off lean manufacturing supplies, make sure you check out Creative Safety Supply.